We had a fantastic turn out at our Lions Christmas Party and it was great to have so many friends together ! The setting was perfectly done by Fred @ Mortons with one long table for everybody. Thomas our ex goal keeper specially flew over from Malaysia to attend the party. Traditionally there were speeches and people who came with a tie got it cut into pieces as it will bring good luck to the Lions. Francois and Mus came with tie and left without ! The last person left Mortons at 130 but the next stop was Unico for many Lions until very late……!

The next day we had our last SIFL game of the year against HStone FC,a Chinese local team. Having the party the night before but with a 3 pm kick off we got all players on time. HStone FC decided to defend only as they only got 2 players making it over the middle line in the first half. We stayed calm and tried to find holes in their defense by good combination football. We controlled the game and with 2 goals by Allan and 1 by Aga and 1 by Dani we took a 4-0 lead. For the second half the target was to keep the cleansheet and keep scoring more goals. The first we did but the second we failed as we hit the post twice and wasted a few more opportunities. In the end we could live with the 4-0 win as it meant we ended the 2015 season unbeaten in the SIFL league as well this season we played 6 games and conceded only one goal which is one of our strong points !

On Sunday we played the SPL Santa Cup with a fantasy line up. Nothing serious just fun play !

We wish all Lions a very good break for Christmas and a good time with their families back home in case they go back ! We hope that 2016 will be another great football year for the Lions !

See you all in early January ! Cheers Freek on behalf of the Lions Management ! 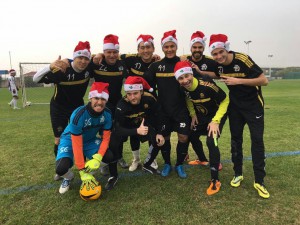