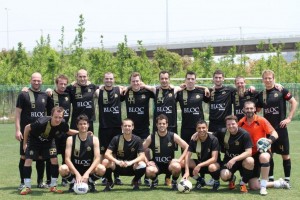 Most of the leagues around the world are over and done but in the SPL it will go to the last matches to decided who will take the crown. It will come down to which team can handle the pressure best and maybe helped by little bit of luck. As Champions do get lucky sometimes ! We are pleased to see that the SPL Posters are promoting our games all over Shanghai ! The picture attached is from the toilet at Blue Marlin at Thumb Plaza a good spot to look at our program and make the decision to come and watch our games. We had a full program last Sunday using our three venues and perfect weather to play !

Galacticos could match up with the Pistolera’s for one half 1-2 but in the end the experience from Bulls players like Stoyan who scored a hat-trick broke them up. Bilgin didn’t manage to get a yellow card !

Nicolas the manager of ERS summed it up nicely ! The Cowboys were too good for them and showed a good display of football. ERS actually was happy that the still managed to score 3 goals against them ! Picture attached is ERS receiving the SPL Team of the week award !

If there would be an award for game of the week this would be the one ! Don’t think both teams will forget this game. First half it was all Flamenkos crushing Japan 1-5, especially Andy was on fire scoring 4 goals. However the second half Japan replaced the old players with the young and fitter ones and that caused trouble for the Flamenkos as they had a small squad this time. It started to look like a set of a tennis game at Wimbledon as here are the scores, 2-5, 3-5, 3-6, 4-6, 5-6, 6-6, 6-7, 7-7 ! Waauw that’s what you call entertainment ! A golden goal would be nice to end this game but unfortunately they had to settle for a draw and share the points.

Big game for both teams as both wanted to stay in the title race. Lions looked more motivated and started strong scoring after 5 minutes by a header of Adam. After the goal the Lions dominated the midfield and created several opportunities but failed to score. Just 1-0 at half time and that should give the chance to Gremio to stay in the game. However second half the Lions proved to be fitter and more hungry and got 5 more players on the score sheet. Lions have the Championship in their own hands as long as the win the last two games !

Talking about pressure the Marlins looked a bit nervous and missed several opportunities. First half score was 2-3 for the Marlins and usually Shanghai 2000 will perform less in the second half but not this time as despite their goalkeeper being sent off they battled until the end. Both Kevin and Fedja were in fine form to seal the narrow win for the Marlins and kept them in the race for the title.

This week the Lions are voted SPL Team of the Week ! A solid win over Gremio and not having conceded a single goal in 2013 did the job for them ! Congratulations !

We have big games this upcoming weekend and we ask the players to stay cool at any time and to respect the referees and lines men decisions as well to shake hand with the opponents and officials after the game whether win or lose ! Lets enjoy our final weeks in our 10th Anniversary SPL Year !