It was a beautiful day ! But just before our final league game there was a massive down poor and it almost made it impossible to play. We guess it was a gift of god in order to wake us up for our must win game against the Krauts as strong german side ! We were motivated and ready to go but in 5 minutes we were 1-0 down after a geat strike of Thommy ! As usual we kept our calm and we tried to get back in the game. The Krauts built a solid defense and it was hard to break them down however with the help of a handball after a Krauts player blocked a header of Danni when it was going into the goal. The referee had no mercy and gave a penalty and a red cards. Azzeddine stood up and took the responsibility to make it 1-1 ! Now the Lions were dictating the pace of the game and the Krauts were pushed back it was a corner from Felix which caused trouble for the Krauts and when they couldn’t clear the ball Azzeddine shot it in the net to make it 2-1 for the Lions at halft time. Confidence was boosted and soon in the second half we scored 3-1 by a fine header of Danni after a Felix corner. Krauts had not much to play for and the Lions kept coming over the wings. On a fast counter Azzeddine went one on one with the goalie and simple passed it to Romain who didn’t miss to make it 4-1. We still had the icing on the cake as Simon who is a great midfielder but never scores…….as he shots are always off target……found himself in a scoring position after a corner and believe it or not he scored ! What followed next was a pile of Lions players on the pitch celebrating this unique moment and of course celebrating the title ! Krauts got a late goal back but when the final whistle was blown the party could start !!!

We clinched our 4th consecutive title three points clear from our old rival the Shooters. It also was our 50th unbeaten game in the League and after 4 seasons we played 68 games and won 54 and drew 13 and lost just one game. All though we don’t talk about this achievement much it is of course an incredible record. Every single game we have given it all and our strong feature over the years have been great goal keeping and a strong defense combined with a controlling midfield and fast forwards plus serious coaching. Well done to every single lion player who have contributed to this success over the years. We also like to thank to big john who had to miss the whole season due to a bad knee injury as he gave us moral support during many games by shouting at referees and our own players !

We still have a Cup final to play and of course like to win it as well we can now concentrate on the SPL where we also are on top with 5 games to go ! 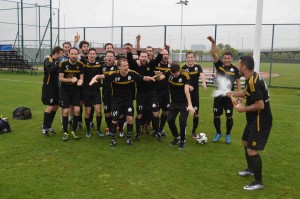 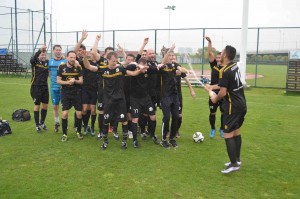 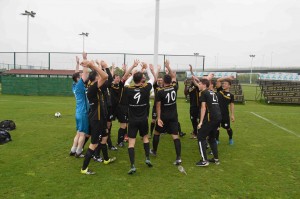