Lions about to write a new history chapter 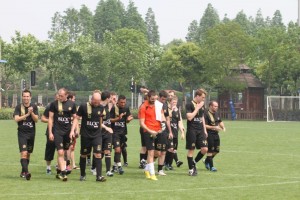 We had another BIG game last Sunday ! It was a must win in order to keep the competition away from us. We were up versus the Cowboys an all local Shanghai team consisting of some ex professional players and ex university players. For the occasion they had a 2.5 meter tall goalkeeper who seemed to be the brother of Yao Ming ! We didn’t have to change much to our team as the previous week we showed hunger for the title versus Gremio who we crushed 6-0 !

The Chinese started strong and they were playing fast on the counter. Once we were caught out when Michael and Dave both thought it was a good idea to go forward. However because they didn’t score the Chinese started to get impatient and started to substitute most of their players.This worked well for us as we find holes in the Chinese Wall. Benji taking water on the side line (now you know why he is doing that all the time) ran full blast into the box with nobody marking him, smart play by Adam and Joel set him free versus Yao Mings brother, 1-0 Lions !

Second half we knew it was going to be tough especially because the temperatures were rising in Green City. However within 5 minutes Dave set free on the right managed a beautiful cross right on Adam’s head who scored 2-0 ! After this we were in control the Chinese were getting tired and lost their hope on the title. We instead felt strong and all the training hard work suddenly paid off ! Now we realized that thanks to the incredible job of Azz and Simone organizing the best trainings in Shanghai, why we are so strong ! As other Lions didn’t want to score Azz showed us how to do it when he nicely put the 3-0 in the far corner. Cowboys pulled one back by a beautiful free kick and that’s the only goal we conceded in 2013 ! Amazing record and 3-1 the final score.

We appreciated Chris to come and watch us play. He is having his most unlucky season with several injuries but to come out and watch it shows real team spirit ! As well we saw a few Lions U18 watching Joel miss in front of an open goal !

Everybody stayed back to watch the Marlins – Gremio game as a draw would give us the SPL Title but I would say luckily we can celebrate at the pitch next week as Gremio beat the Marlins 3-2. Both the Marlins and the Cowboys are out of the race. We have three points more than Gremio and only one game left for both and our goal difference is +27 in favor of the Lions !! Now we know why early in the season we said that the goal difference is very very important !

Let’s all come to the training this Wednesday and prepare well for our final game of the season versus the Marlins. We want to end this great season in style  a revenge win over the Marlins !

When we will clinch the title on Sunday it will be the first time in Shanghai that a team have won both the SIFL and SPL title ! Everybody who has a Lion’s heart please come and watch this unique moment 1400 PM at the GreenCity Jinqiao field !