We had a good Sunday ! First up were our youngster helped with a few veterans who played a friendly against the veterans of Super 48. The young lions straight wrote history as they scored the fastest goal within a minute after kick off by Mathew on their first attack. The final score was a 4-2 win and overall a very good experience for the youth to play against men as it will make them stronger so that we can prepare them for playing time with the Lions senior teams later !

Next up was the big game of the season against Gremio. Gremio a mixed Chinese and Brasilian side were undefeated until today. We started well and created several opportunities early in the game. However an incredible referee error left us flabbergasted as Hugh on a Maglev speed run to the keeper was stopped by a body check of one of the Gremio defenders in the box / FIFA rule 12 states all fouls in the box are straight penalties and if he was blocked from a scoring opportunity it was straight red as well otherwise it should be yellow. We got non of it only a free kick in the box……. We lost our focus and despite going 1-0 up by Adam we let Gremio get back in the game. A free kick was signaled into the corner of our goal by Thomas our goalie as if he was a Chinese traffic police directing the traffic……….! Soon after we didn’t clear the ball well in defense and Gremio took the lead. It was 1-2 at half time and we got a few heads down however the second half we saw a different Lions team. It was a team full of spirit fighting for every single ball and opportunity. With two goals from Mathieu and one header at the post and two more shots on the cross-bar we showed them who are the leaders in the SPL. With this 3-2 victory we wrote history in the SPL as in 2013 we drew only one game and won all the other 18 games we played !

Actually after the game in an empty SRFC Clubhouse we showed our real spirit as we all stayed back for a few beers with fun and jokes. Hugh got a farewell speech and a signed ball to take back to Australia. We were also trying to get bit and pieces from Jacks Adventure as he didn’t show up….

Great way to end a great year for the Lions ! Waauw ! Don’t forget to vote on line for the Lions as “Sports Team of the Year” ! Our next game is on January the 12 vs ERS. Stay fit and focused ! 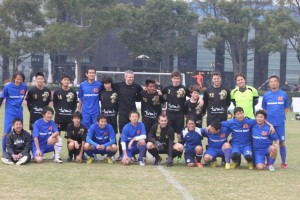 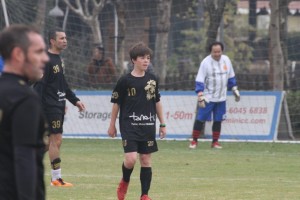 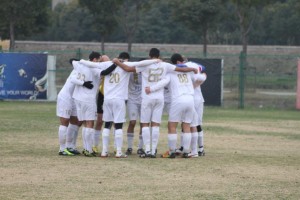 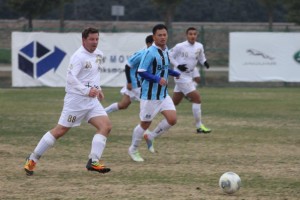 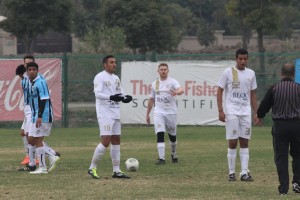