We knew that one day we would lose a game of football after our historic unbeaten run we just didn’t know when. If you end a season unbeaten you don’t expect the same to happen the next season and the next …….but for us we wrote history as we stayed unbeaten for 50 games in a row in the SIFL! This record stands and we can be proud of it every single Lions player who has contributed to this can be proud and should be proud. Actually we were on our unbeaten run 4 years ago already when only at our last game we lost against DIB while we were already champions and the result didn’t matter anymore ! At some point the unbeaten run became a burden as we knew we can only go down-hill from where we were but at on other occasions we used it to fire ourselves up against good opponents. We always have stayed humble about the record but at the end of last season when we won our 4th consecutive SIFL title we did take the time to look back and celebrate what we have achieved as a club !

It has been an incredible journey to come to this point and we have stressed it many times we achieved it by commitments and hard work from extraordinary people who gave it all for the Lions week after week for the last 4 years !

Now it came to an end for various reasons but it was  better it happened in the first game of the new season. Our opponent was 3United and we had 6 regular first team players not available for this game. In the first half we had some good moments and a goal from Tomas got disallowed… As it goes in football if you don’t score the opponent will and that’s what 3 united did. In the second half we pushed more forward trying to find an opening in their defense but they were very motivated to get a good result. We couldn’t turn the game around and instead 3United scored on a fast counter 2-0 !

It was the end of the record but in the meantime it was the beginning of a new time for the Lions as we have to move forward after some key people left and still like to win trophies with the new players around us !

Let’s get our act together and use our experience in the games ahead of us !

To put it very simple our next training is on Tuesday and that’s where we start our come back and we expect all Lions to attend ! 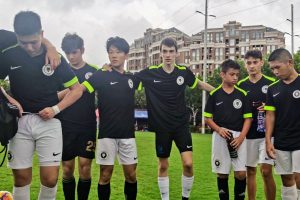