Mixed result for the Lions

What a beautiful weather this weekend. A rare blue sky combined with pleasant temperatures at 25 degrees last Sunday. The stage was set for for a great football Sunday. 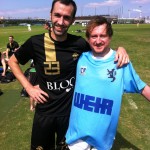 First up were our veteran masters. They tried to defend their unbeaten run in the veterans league. However their opponent was the “Angst Gegner” the Scott’s and they had young looking side ready to fight. The first 20 minutes we played very well and got a 1-0 lead thru Frederic Fuseau. However we gave them an early Christmas present (1-1) and after that we started to play less concentrated. A fast break by the Scotts in the second half gave them the lead 1-2 and from then on it was game on! Lions attacking but failing to pose any real threat and the Scott’s defending with everybody in the box. If you don’t score its hard to win a game and that’s how we got our first loss, 1-3! 3 games to go and we are still on top of the League. We hope that all the masters attend the training on Wednesdays so that we can get our sharpness back!

Second Lions team in action was for the SPL! A lot of new faces a few making their debut. Galacticos was our opponent and for us the key was to work on our goal difference tally. Within two minutes we were 1-0 up and played well.  Several goal scoring opportunities resulted in a 4-0 lead at half time. Dave was one of the better players on the day however a school trip to the middle of China gave him some difficulties with his digestion system and he had to run to the toilet twice in the middle of the play! The second half was a festival of missed chances on our side and the mistake we made is that we adjusted to their games style. Azz had an interesting discussion with the referee while trying to take a corner, the referee not speaking a word of English and Azz not speaking a word of Chinese, they settled in Dutch! In the end 6-0 and the Lions are back on top of the SPL with 9 points out of three games and only one goal conceded !

On Saturday, we had 1 3rd friendly verus ex-Chinese professional players… Not as friendly as previous game as both team wanted to win… A lot of sportsmanship fouls on Chinese side made our players nervous and as usual we started to blame the world and talked too much… Keep this in mind for next Saturday game versus DIB!

We have a big game on Saturday against DIB at WGQ 15:00 kick off. We hope to see all the lions and friends coming out and support our team! Please register below if it’s not done already.