Mixed results for the Lions this weekend !

On Saturday, we were up against the Krauts, a German team with a good German mentality. It does happen sometimes during a season that a team is switched off and its hard to explain but the Lions were just not there in the first 45 mn. We could have substituted the whole team except our goalie Radouane who was keen to keep a clean sheet. Arnault got a great chance to open the score with a header but he missed in front of the open goal. Patrick hit the cross bar and Bilgin the krauts coach re-invented the german wall as he ordered all his players to defend on their own half. In the second half, we played better and created plenty of opportunities but failed to take the them. Felix got the best chance for the Lions as the ball already passed the keeper and a slightest touch would have rolled the ball in the goal but somehow he shot the ball over the cross bar. It stayed 0-0 in the end and it was a fair result. We are still full in the title race as the Shooters drew as well. We have 3 games to go and our next game will be in 2 weeks against the Dutch !

On Sunday, we were up against Gremio. We tried to capitalize on the slow start of Gremio as their players arrived late. Tomas and Kevin could have both opened the score in the first 5 minutes but their shot went over the cross bar. Tevz was dangerous on the wing and a foul on him gave us a penalty, which not many players wanted to take. So the honor went to Allan, just back from Colombia and he saw his effort stopped by the Gremio goalie. Tomas hit the cross bar with a nice free kick but it stayed 0-0 at half time. In the second half, we played a bit faster and were looking for the opening goal. A tomas free kick found Laid who tipped the ball behind the keeper ! Finally we scored ! We should have been 2-0 up soon after when Charles was alone in front of the keeper but his effort was too soft and an easy pick up for the goalie. In the dying seconds Gremio hit the cross bar but it stayed 1-0 for the Lions. A good result for the Lions which kept us number one in the SPL with a 3 points lead.

Let’s all come to the training on Wednesday and stay focused ! The Lions Legends will play this Sunday against the Emerald in their second game of the season ! 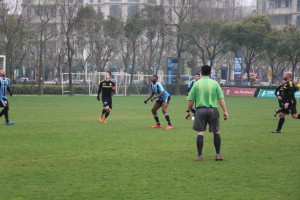 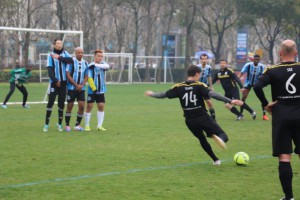 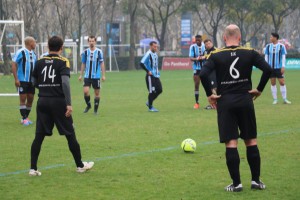