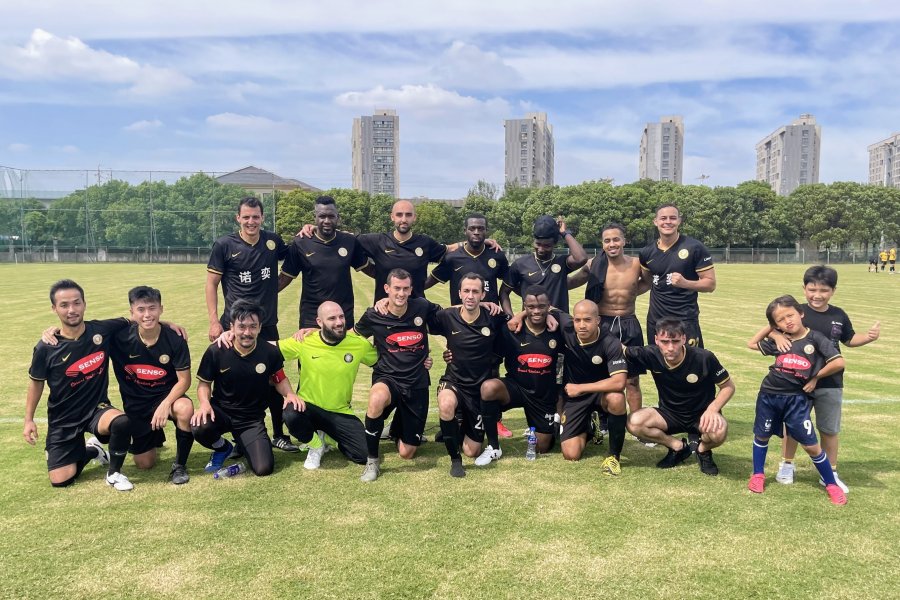 Last Saturday, our senior team had its 1st game of SIFL season 2021-2022 after a long summer break. Hazard of the calendar (or not), we were up against the last SIFL champion, the Azzurri FC Shanghai. Despite none of our youth players being available (they had their 1st SYFCL league game at the same time vs. Shanghai Shenhua FC U17); we came with enough depth in the squad with 17 players.

While we’ve been happy with our overall performance last year for our return to the league; our objective during the summer was to improve the team in order to do better in SIFL season 2021-2022… Then, the management team (Pat especially) put lots of effort into the “Mercato”. Among others, the objectives were to:

With Samad, Nico L., Peter, Othmane, Sam, Costa, Hon & Florent making their debut into the team; we felt that the contract was fulfilled in terms of quality/quantity… the only question before the game was “would this be enough” against a tough opponent?

For the 1st half, we organized the team in 4-2-3-1 with Masa-Pat-Othmane-Samba in defense; Cyril & Sam as defensive midfield with the trio Samad-Peter-Hira above them. This was completed with Nico upfront. While the game only started, we felt very quickly that we were dominating in the midfield. After 15/20mn, Samba pulled his hamstring and FL came in to replace him as a left-back. Unfortunately, Azzurri scored right after this substitution on a “lucky” strike at the edge of the box after a cross from the side… Kind of unfair given the physiognomy of the game but we went back immediately to combat.

Our pair Cyril & Sam kept on getting balls back high on the pitch… Also, our fast transitions forward were really efficient and hurting the Azzurri. On the 30mn, Flo who came in a few minutes before perforated on the left side; made a magnificent cross that Peter finished with his chest 1 meter away from the goal line… beautiful! Just before half-time, Cyril came close giving us the lead with a long-range shot… but it finished just outside the post. 1-1 at half-time.

We kept on with our domination at the beginning of the 2nd half… It felt good seeing the Azzurri starting to worry. Then, we lost a bit of composure for 20mn and the game became more even. Both teams could have scored and Azurri got a few dangerous freekicks. But we got the match ball with Flo on a counter… Unfortunately, his ball went just wide the post while he was one on one with Azzurri’s goalkeeper. 1-1 as the final score.

Before the game, we would have signed for a draw… After the game, the result felt a bit bitter. Let’s take it still!

Well done lads! This is only the beginning… Let’s keep serious, ambitious, and train hard. I’m sure, the more we play together; the better we’ll get