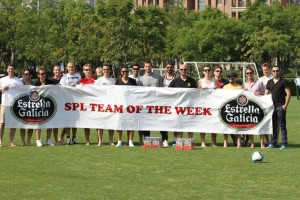 The SPL posters were hanging everywhere the writing was on the wall. We are in the final stages of our season and still four teams are playing for the title. Our 10th anniversary will for sure go into the history books as one of the most exciting Leagues ! We had four big games last Sunday  !

Flamenkos are struggling recently to get a full squad not sure it was related to the Spanish F1 and Alonso winning but it broke them apart in the second half. Its getting harder to play in the heat of Shanghai and the fitness of the players is getting more and more important. Gremio came back strong after their disappointing match versus the Lions last week and were in control of the game. Three goals and no cards and second in the SPL was enough for them to win the “SPL Team of the week award” this week ! Congratulations !

The biggest game of the weekend both teams looking for win to catch up with the Lions and Gremio. In the first half Gremio looked more sharp and focused and the Cowboy defense was having trouble with the long ball counter attacks of the Marlins. Kevin the Marlins no 1 goalscorer proved why he is the leading goal scorer in the SPL with two great goals scored on the break.  Of course a two-zero lead into half team should be a good enough cushion for the Marlins but a reaction of Kevin after a Cowboy stepped on his feet saw him being sent off. It gave hope to the Cowboys who scored two fast goals and equalized. The Marlins in the end had it all in their own hands after they got a penalty awarded however the feet of Fedja pointed straight at the Cowboys goalie and he stopped the ball. Two all and both teams are waiting for the other contenders to slip up now !

Bilgin troops kept their record straight / not winning when Bilgin is not there and no yellow for Bilgin when he is not there. Shanghai 2000 had a deserved win and start to look stronger and stronger as team.

This weekend we have three massive games and we like all friends and family to come out and support their teams ! For some teams its now or never !

We ask everybody to stay calm and play to the whistle and enjoy the best games of the SPL !

PS: if the weather stays good we plan to organize our SPL end of the season tournament on June the 16th + party and ceremony ! Keep it free in your busy agenda’s!