SPL going into the final rounds ! 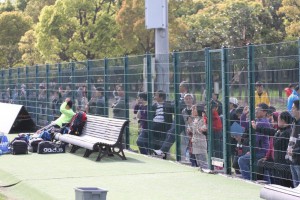 We had an interesting SPL Sunday with a few teams not being able to field a team due to the Qin Ming Holiday. The three games we had were all high intensity and entertaining. Especially at Century Park there was a large crowd of local people watching the SPL and Gremio got the great idea of holding a BBQ in the park right after their game. The decisive games are now around the corner whether your are at the top or in the middle or at the bottom of the league all teams can still fight for a better ranking or try to keep their current rank. Spring is the best time of the SPL season and its time to share the pleasure of playing football on the best pitches of Shanghai with your family and friends !

A big crowd was watching this game and they got value for money ! Some of the Gremio players arrived late due to traffic and Shanghai 2000 took advantage and started stronger. They took a 1-2 lead in the first half in the second half Gremio realized they needed a win and started to push forward however Shanghai 2000 scored a beauty to take a further lead 1-3.

Gremio didn’t give up here and got a goal back 2-3. It didn’t seem to be Gremio’s day as one of the Shanghai 2000 players thought he was Beckham or Rooney as he scored from the middle line ! Standing Ovation from the home crowd ! No it was all or nothing for Gremio and with goals from Zhu Biao and SPL top scorer Francesco they tied the game to 4-4. Gremio thought they had won it when they scored from a deep cross but it was ruled off side.

Less entertaining match mainly due to the lack of goals. Credit for Japan as they held the Lions to a 0-0 draw in the first half. They came close to score with the too fast Japanese striker running at the young Lions keeper Bryce with a bullet train speed but Bryce without fear stopped him and the ball ! The lions managed to get a scrappy goal and nobody was celebrating as they knew they should have scored more goals than that one however in the end the got the three points and a clean sheet and it proved to be important.

Another high intensity entertaining SPL match ! The Marlins started stronger and seemed to be more awake but in the 15th minute a cross from Stoyan ended on the feet of Stas their winger who shot straight over the Marlins keeper.

Ten minutes later the Bulls got a free kick on the edge of the box and Kun managed to score the 0-2 hitting the ball over the wall into the net. The Marlins got a goal back by a penalty converted by Mcgoo to make it 1-2 at half time. Marlins came out stronger in the second  half as the knew only a win would do to stay in the title race ! However Kun of the Bulls had other ideas he slalomed thru the midfield and shot a torpedo in the left corner,

1-3 Steve the Marlins manager commented it was fantastic goal ! The Marlins didn’t give up here and got a goal back they pushed until the very end and were denied by the cross bar and an open chance for Jamie. The Bulls took all three points in the end of a good game of football !

Sunday we have 5 SPL game and are back on the Jinqiao field as the seeding was done !

Enjoy the games and for the ones running the 8k in Jinqiao try to stay ahead of Kevin !

Cheers Freek SPL President on behalf of the SPL committee !