[SPL News] Santa is coming to the SPL 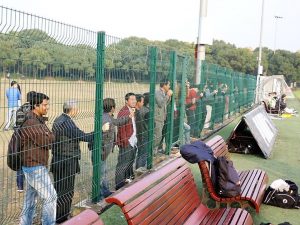 It was excellent weather last Sunday ! Unseasonably warm with close to 18 degrees !  We had the last two league games of 2016 at Century Park and many local people came to watch our games !

This Sunday we will organize our Santa Cup !  A fun 7 aside tournament where we like to show our friendship and SPL spirit ! We combine this year with the SPL V Santa Cup which will make a great setting at the Jinqiao field with 4 pitches and 18 teams in action ! Green City will be full with Santa’s ! We as well organize a charity match for the Will Foundation for the children in need ! After our hard work on the pitch we can relax at Latina have a few beers and enjoy the BBQ (180 rmb all you can eat inclusive of 60 rmb drink coupon) and see the performance of the Brazilian band and dancer ! It will be a great way to end another great SPL year ! At Latina we will do a LIVE Draw of the SPL Cup with the team managers ! So don’t miss the action !

It was great day and a great game on the perfect pitch of Century Park ! Beforehand the Lions were warned about the speed and pressure of the young players of Century Park as they have scored in all their games in the first 5-10 minutes. They did get their chances but failed to score. The Lions defended well after that and were waiting for their counter opportunity. Felix came very close to open the score and Dim the Lions goalie had a brilliant save with a one on one to keep their clean sheet. The lions decided to step up in the second half and take more control of the game.  Their combinations started to work and they created several opportunities. The hard work they showed was paid off when Dave had a great through ball which was laid off twice and presented to good old Capitano Tomas. He didn’t hesitate and scored the 1-0 with 5 minutes to go on the clock. Century Park tried to push forward in the last minutes but couldn’t create real danger in the Lions box.

It was one of those days that the Japanese showed their qualities with speed and short passes and always dangerous on the counter attacks !

We hope to see many Santa’s on Sunday !