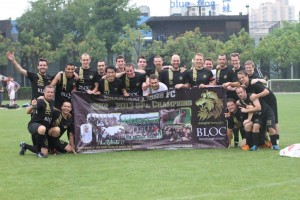 After 20 rounds of battling the SPL finally has a new Champion ! The lions clinched their 8th title after a 2-1 win over the Marlins. In the end we can say it was deserved that they won it as they had the best defense in the league conceding only two goals this year. As well they won all their games versus their nearest opponents and saw some of them slip up in the last games of the season. Great end of a great Championship !

We have one more round before we can give you the final standing but most of the teams know by know where the ended on the charts. Next week we will look back at the season !

Flamenkos were low on numbers and will need to recruit new players if they want to do better next season / Pistolera on the other hand ended the season with win and Bilgin seemed to be a changed man after his third game in a row without a yellow card. Of course he will still clinch the “Mr Yellow” title of the SPL with 11 cards for the season.

Great game for the spectators. Loads of goals and friendly spirit. Both teams had a second place in the SPL at stake. For the Cowboys it was a must win or ending up third or fourth. The were dangerous on the counter attack with their in form strikers duo Zhuang and Chen KL.

They got a 3-2 lead at half time and even managed to score direct from a corner in the second half. Zhuang leads the SPL top scorers chart with 33 goals together with Kevin from the Marlins. With the 6-4 victory and the chance to end second in the SPL this year we thought it’s a good time to award them with the Estrella Galicia “SPL Team of the week” award ! 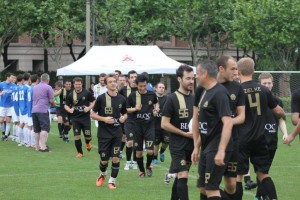 Lions were already Champions as Gremio lost and were very happy to receive the guard of honor from the Marlins. Great spirit !

The Marlins started strong and looked more motivated despite having lost the title race two weeks back. A fast break on the left followed by a perfect cross found Kevin and he knows very well how to score ! 0-1 Marlins and for Kevin the goal put him level with Zhuang, 33 goals ! The second half the Lions, who didn’t want to end the season with a loss, scored two fast goals to take the lead. After that the Marlins kept on pushing forward and all the Lions could do was defend. Twenty corners for the Marlins later it was the final whistle and the Lions could celebrate the title.

There was a 7th place in the SPL at stake and for the rookies Shanghai 2000 versus the old timers Japan that was enough motivation. Japan had most of the ball possession but failed to impress in front of the goal. Shanghai 2000 scored twice to clinch a spot above Japan which is a good performance for the first year of tasting the SPL.

We have our final three games on Sunday and only the Cowboys game does matter for the ranking !

Enjoy the last fun games of the season and we are in full preparation for the end of the season tournament on June the 16th, 7 aside 12 teams !

1100-1600 PM Followed by our 10th end of the Season Party at Latina, all the dancers are in training now and we hope to see all of you to have a few beers together after such a long season !

Cheers
Freek- SPL President on behalf of the SPL Committee