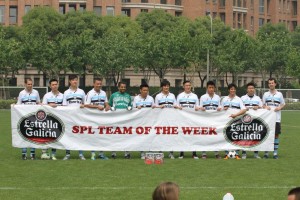 We had three great games on a fantastic field in Jinqiao thanks to the hard work of Adam the grassmaster and his team ! As the tension was high and there was a lot at stake for the top 4 teams we noticed people smoking on the field. A quick reminder to all of you this is a school field and we are the guest. Smoking is absolute forbidden on the field and you need to smoke outside on the street. Hope you all can cooperate and warn your players if you see them smoking !

The Pistolera’s playing in white for the occasion were physically stronger especially in the first half as they took a 1-2 lead. However Japan was physically fitter and with the higher temperatures in Shanghai nowadays they came back into the game, helped by the SPL oldest goal scorer Sakurai-san, 55 years old, who scored his second of the season.

Bilgin’s comment was that one day he will be the oldest person to receive a yellow card…and blamed the loss on his goalkeeper who he has put on the transfer list straight after the game. Japan however is having a revival after their poor first half of the season and gained the ” Estrella Galacia SPL Team of the Week Award ”

Very big game for both teams as a win could put either team closer to the SPL title. Despite the tension the game was fair and especially the first 25 minutes were very fast and both teams showed great football. The Cowboys were playing on the break with their strong strikers and the Lions tried to control the play in the midfield. The break through came when Benji of the Lions went un-noticed into the box after a water break and scored the 0-1. After that the Cowboys lost the grip on the game and the Lions had several opportunities to score more but they missed maybe caused by nerves…! The second half the Cowboys intended to come back strong but a perfect cross of Dave straight on the head of Adam after 5 minutes gave the Cowboys a killer blow. It became more and more a fitness battle and the Lions looked fitter and scored 0-3 ! A perfect free kick from Chen KL gave the Cowboys a small reward for their hard work. After the game Eric the Cowboys manager commented that they really enjoyed the game despite losing. That’s the right spirit and that’s what make the SPL great !

Both teams saw the Lions win and knew that nothing but a win was needed to stay in the title race. The first 25 minutes we saw both teams playing attacking football looking for the opening goal. In the end it was Gremio who got the 0-1. In the second half the Marlins knew that they needed to score at least two goals and pushed more forward. It didn’t pay off as Gremio scored a second and a third. Credit to the Marlins as they never gave up despite being 0-3 down and still managed to score 2 goals in the last 10 minutes of the game.

With that result the Lions are in the driver’s seat to clinch the SPL title next week as they have 3 points lead and a + 27 goal difference over Gremio who are second. ERS and Flamenkos will still have to battle for the 5th and 6th place and Japan will battle vs Shanghai 2000 fr 7th and 8th place.

On June the 16th we will have our end of the season 7 aside tournament starting at 1100 AM until 1600 PM followed by our traditional party at Latina where we have the award ceremony. The dancers are already ordered don’t worry !!

Another round of great games this Sunday and the best time to bring your friends to watch the games and enjoy the SPL !

Cheers
Freek – SPL President on behalf of the Committee