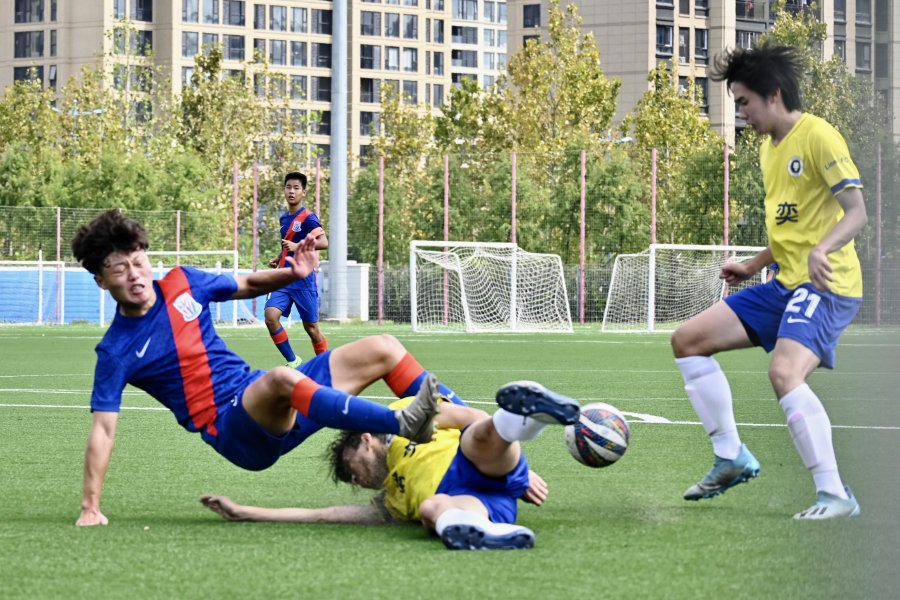 After months of administrative hurdles, we finally managed to register our U17 team into the 2021 Shanghai Youth Football Club League (2021上海市青少年足球俱乐部联赛). A great achievement for the club as it shows that we’re officially recognized by the Shanghai Football Association (SFA). Let’s be honest, it’s been a rush getting all the player’s ID/Passports and Covid forms filled in on time for all the players… This is the price to pay when you want to play under the SFA banner.

Among all the pitches available in Shanghai, the one chosen by the SFA was super far no matter where you came from Puxi or Pudong. This inconvenience aside, we looked cool in our brand new kits despite our small squad of 14 players. Yes, our squad got squeezed out due to some CFA regulation… Some players were too young and some were too old without any possibility to bargain. The icing on the cake with Ryan still injured and Daniel not available as well.

For our first match, we were facing Shenhua FC U17… probably one of the toughest opponents of the competition. For this game, a couple of our players were playing for the 1st time in an official league match… Then, our strategy was to play defensive not to concede goals as we did against SIGP U17 during our last summer tournament.

With the help of Chris on the coaching side, we managed to keep the team in good formation working well together. Yes, Shenhua FC U17 took the lead after 7 minutes with its both wingers No. 7 and No. 12 being a constant threat together with Shenhua captain in the midfield. Yes, we conceded goals but some of them could have been easily been avoided with a little bit more confidence.

We got a good opportunity at the end of the 1st half when we pushed our players forward in the box for a free kick. It was well taken by Yu Xuan however we didn’t challenge the outcoming keeper… He got the ball first and launched their counter-attack. With only 2 moves it was 5-0 instead of 4-1 at halftime.

During the break, Hans had to step down due to stomach problems and Pat came in as a replacement. We started well hardly giving anything away pushing Hugo up forward as a “fake 9” to get a bit more attacking power. Yes, they did score another two goals but mainly after we didn’t find the quick solution and ran into trouble. At the end of the match, they did score a nice free-kick. After that, we just tried to keep the score down as our legs were getting tired.

When the final whistle was blown all coaches said we defended really well today which of course sounds odd looking at the scoreline… On our side, we want to outline our “fighting spirit” as the key positive outcome >> We never let our heads down while being under pressure for 90 minutes.

Next Sunday 03rd of October, we shall play Lucky Star at 18:30 pm for our 2nd game of the 2021 Shanghai Youth Football Club League. We will keep you updated if the venue was to be changed.

We like to thank all the parents who came all the way to watch and support the team. Pat couldn’t coach because as our senior team was also playing at the same time in the SIFL league.