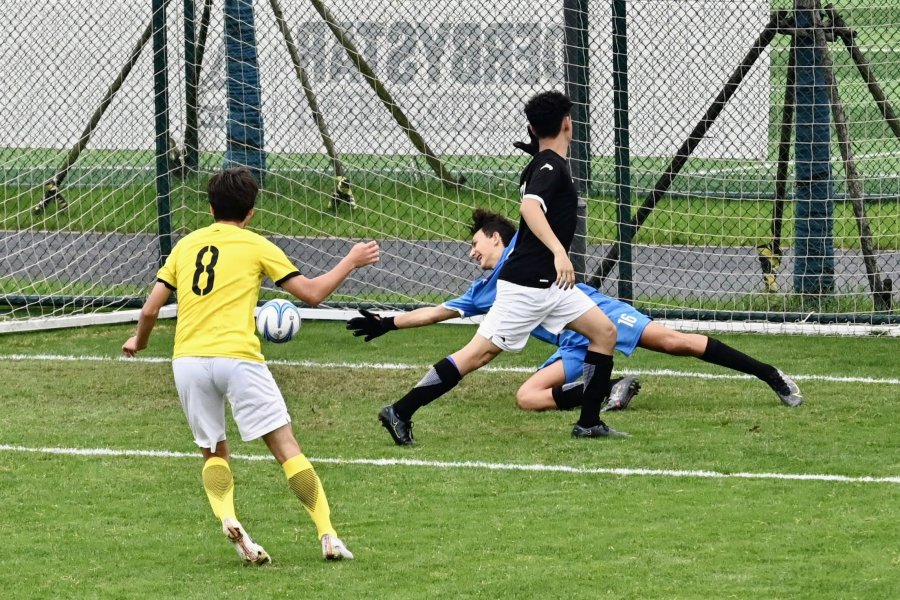 U17 lose vs. rival J Academy

For our 3rd game of the Shanghai youth tournament, the setting was perfect to play old rival J Academy. Also, we were pleased to see many parents, family, and friends coming to watch on the stands. For this game, we did have a disadvantage as this was our 3rd consecutive game in 3 days. On its side, J Academy only played once and had a bye on Saturday. Our players knew that and we asked them to push again & show spirit.

We did make some tactical changes in our formation to make sure we wouldn’t go down early in the game. Our heads were clear and we started to game well putting pressure on their defense which caused them build-up problems. A motivated Ryan caused them trouble in the first 10 minutes and we managed to get behind their defenders a few times. On one of them, he managed to cross the ball to Daniel who scored and gave us a 1-0 lead.

J Academy started to put more pressure on us but Jay our goalie was alert and stood still. Juventus got a couple of dangerous corners and managed to equalize on one of them. In the next 20 minutes, it became a mental game and we are happy to hold on to the draw into halftime.

In the second half, we decided to go back into our usual formation to give them fewer opportunities. The game seemed to settle down to a draw as both teams were clearly getting fewer opportunities… Unfortunately, Juventus took the lead with a through ball which ended up with a 1 on 1 with our keeper… Believe it or not, we all believe the player was offside.

With only 15 minutes to go, you would think that the game was over for the Lions… It was not!  We pushed hard for justice and did get our equalizer with an amazing goal. It started all the way from the back going with several passes in a row between our players… On a perfect cross from the right, it found Ryan on the left who crossed it back to Aaron for a well-deserved equalizer.

Now, we wanted the win and pushed once more and with the same kind of attack… We almost got the winner but we didn’t manage to finish it. With 60 seconds on the clock, disaster struck as we couldn’t clear a ball… Instead, we gave it to one of their best player who managed to slot the ball in the right corner.

It was hard to believe that after such hard work and outstanding team performance we didn’t get any reward. It was very harsh for the players, the coaches, and the parents… but this is football.

On the positive, today we saw a supergroup of young Lions. They fought until the end supported by many parents, older Lions & youth players to cheer them on. We never lost our heads during the game and all players were positive despite the tired legs. We are proud of you and next time, we will score the winner at the last minute!

On Tuesday, we will play AKS at 09:30. Let’s take a well-deserved rest tomorrow.