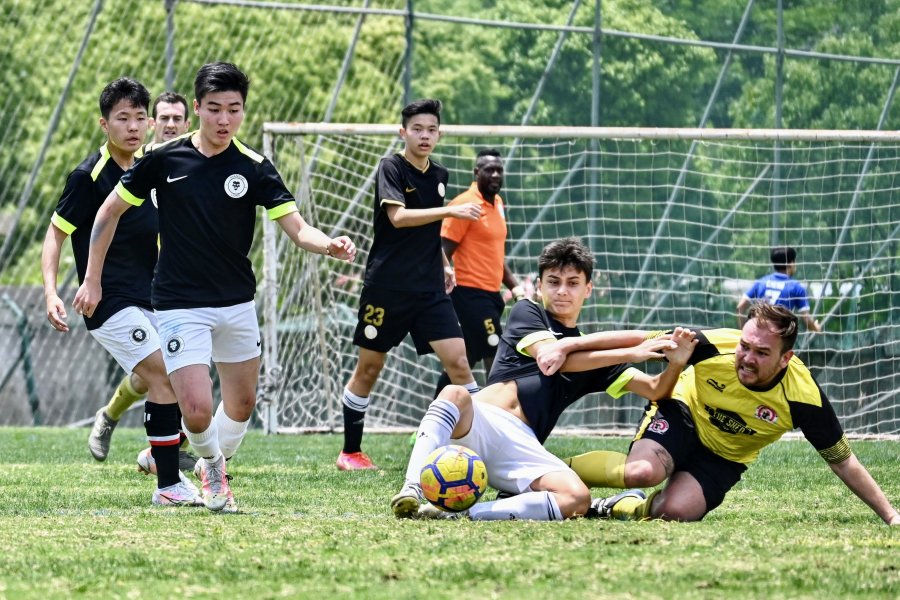 Last Saturday, we were participating in the SIFL Closing Tournament of season 2020/2021. For this occasion, we decided to line up our youth players. The idea was for them to get experience and see what it takes to play in a senior league. Pat was kind enough to play as goalkeeper to let them play as much as possible. As it was a 7 aside tournament with only 15mn per game, the format was different than standard 11 a side matches.

On the morning of the SIFL Closing Tournament, we had 3 matches to play. Our best match was against the SIFL champion Azzurri… In this opposition, we were not afraid to give them a hard time and we fought like real lions. It was super nice to see the whole team working for each other. The key for us was to defend well to make sure Azzurri didn’t score… With 5 minutes to go Ryan was launched by Yu Xin. When he cut inside to face the keeper we thought he was clearly fouled in the box… but the referee didn’t want to give the penalty. As it goes in football soon after Azzuri played a nice attack which they finished with a header.

In the afternoon we had another 3 matches. On one of them, we were up against the Shooters (No. 2 this season). It was hard mainly due to the physical difference on such a small pitch. Experience also counted in favor of Shooter as with this no-off-side rule, they kept one player all the time in front of Pat our goalkeeper. The striker did well with their 1st goal. The 2nd was a cheap penalty awarded by the referee. Let’s guess he thought Yu Yang cutting a Shooter into pieces within the box.

In our last match against a Japanese team, our only goal was to score and we went for it! We created several opportunities but saw our efforts being blocked or going wide. Finally, we thought we got the goal we deserved when the Japanese goalie took Brandon’s effort down… but the referee got fooled. In the end, we even pushed our goalkeeper Pat forward but we got punished with our goalie on the middle line.

In the end, we were happy with all the youth player’s efforts… Definitely, we have good improvement potential for next season. The key is to keep training hard and get stronger as a player and as a person.

Well done Lions. This Thursday we train at Qi Yi and on Sunday we booked F45 at 14:00. We expect everybody to join.

PS: Congratulation to Pat and Masa-san who were elected by the other players of the SIFL Senior League into the “team of the year”.